In 2004, Isaias Fanlo published his first book, El llibre rosa (The Pink Book, Columna Edicions). Celebrated since its publication as a pioneer essay, it was prised as an ambitious attempt to embrace the implications of belonging to the LGBTI community, and of being an ally. The book covered a wide range of issues, from the cultural heritage to queer etymologies, as well as activism and the fight against institutionalized and social homophobia.

As the first essay published in Spain addressing these topics in a non-pretentious manner, The Pink Book became a quite notorious work, and played its part in order to legitimize precarious voices in a moment in which Spain was immersed not only in a debate about equalitarian marriage and adoption, but also about how the LGBTI community were perceived in the first decades of democracy. 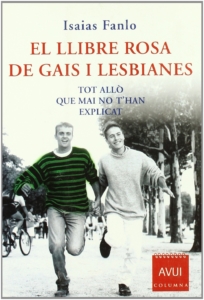 Ya no estoy aquí – I Am No Longer Here (novel, upcoming)

Currently, Isaias Fanlo is in the process of revising a new novel, with the working title of Ya no estoy aquí (I Am No Longer Here). The story takes place in Rotunda, a fictional city in the West border of Catalonia, through the life of three generations, from 1939 to 1993.